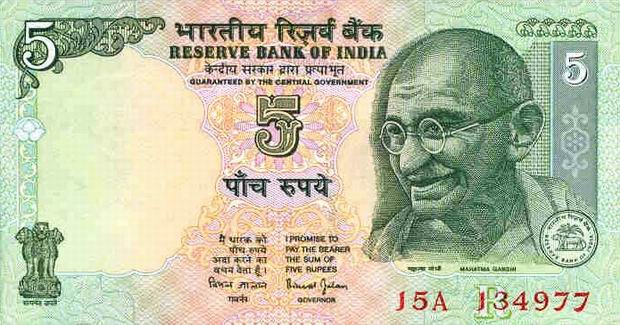 A Reserve Bank panel recommends that no other personality can represent the ethos of India than Mohandas Gandhi and hence only his image should be printed on currency notes. Read this along with the Infosys head Vishal Sikka’s lines recently, that the Indians don’t speak up, they just follow orders. Gandhi never raised his voice and asked for freedom. Some picturise him as one holding a begging bowl in his clumsy hands, willing to wait till eternity to receive a share from the leftovers.

Gandhi started movements like the salt satyagraha, noncooperation, Swadeshi, fasting unto death, and Quit India, but pulled out half way through all of them. He did not find an opportunity to get freedom during World War II and India ended up siding with the British forces. Those who didn’t follow the orders and spoke up against the British Raj were the likes of Subhas Bose, Bhagat Singh, Chandrasekhar Azad, and Uddham Singh. At a time when Gandhi’s non violence lost grip and Subhas Bose rose to the role of Congress president by defeating Gandhi’s candidate, Gandhi made good use of the noncooperation tactics and forced 12 people from the Congress Working Committee to resign. This led to Bose’s decision to resign as the president and seek alternate ways to bring the country freedom.

I am against putting any person’s image on the currency note. We must be careful when we select the people to represent the culture and values of the country. Gandhi was once described by a Tranvancore chief as a most dangerous, semi-repressed sex maniac. Several biographers including Jad Adams have written about Gandhi’s private life and his experiments in the name of testing his celibacy and chastity. He used to sleep and bath with women. It required a letter from C. Rajagopalachari to bring back bapu to the freedom struggle who in between went about chasing his private love affair with Sarala Devi. He did not allow Kasturba to take English medicine which done her in, but when there was a need did not hesitate to take English medicine by himself. He also denounced his son when he accepted another religion. It is hard to imagine that this man wielded the sword of ahimsa and begged freedom from the British.

But all that doesn’t matter any more; we just need to follow orders. May Gandhi continue to adorn our currency notes and represent the ethos of our country and remind us ever to follow orders.