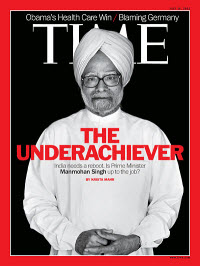 We all saw how Dr Manmohan Singh was rated by the Asian edition of the TIME magazine recently. Let me take you back to the year 1938, when Subhas Chandra Bose was the President of the Congress party. He was on the cover of the TIME magazine, US edition, 07-Mar-1938. When Manmohan Singh is given a description “underachiever” for what he achieved, TIME chose to give Bose’s quotation on the cover in 1938 – “Britain has ruined India economically, politically, culturally, and spiritually.” The cover story was titled “Chariot of Freedom.” Bose – Britain’s enemy number one – was described by TIME as follows “Among the slick, top handful of Congress politicians, most of them obviously enjoying the incense of power and prestige, Subhas Bose stands out.”

But what did our government and intelligence agencies do to the Braveheart? They still hide information about the Bose death mystery from the public by stamping documents as TOP SECRET even after 66 years of his “so-called death in a plane crash.” The Intelligence Bureau chose to cook up intelligence reports to “prove the fake death”. Bose must get justice and the deserving place in history. Else, posterity will indict us for our slackness in asking the government why it left out in the cold the greatest son Mother India has ever produced.